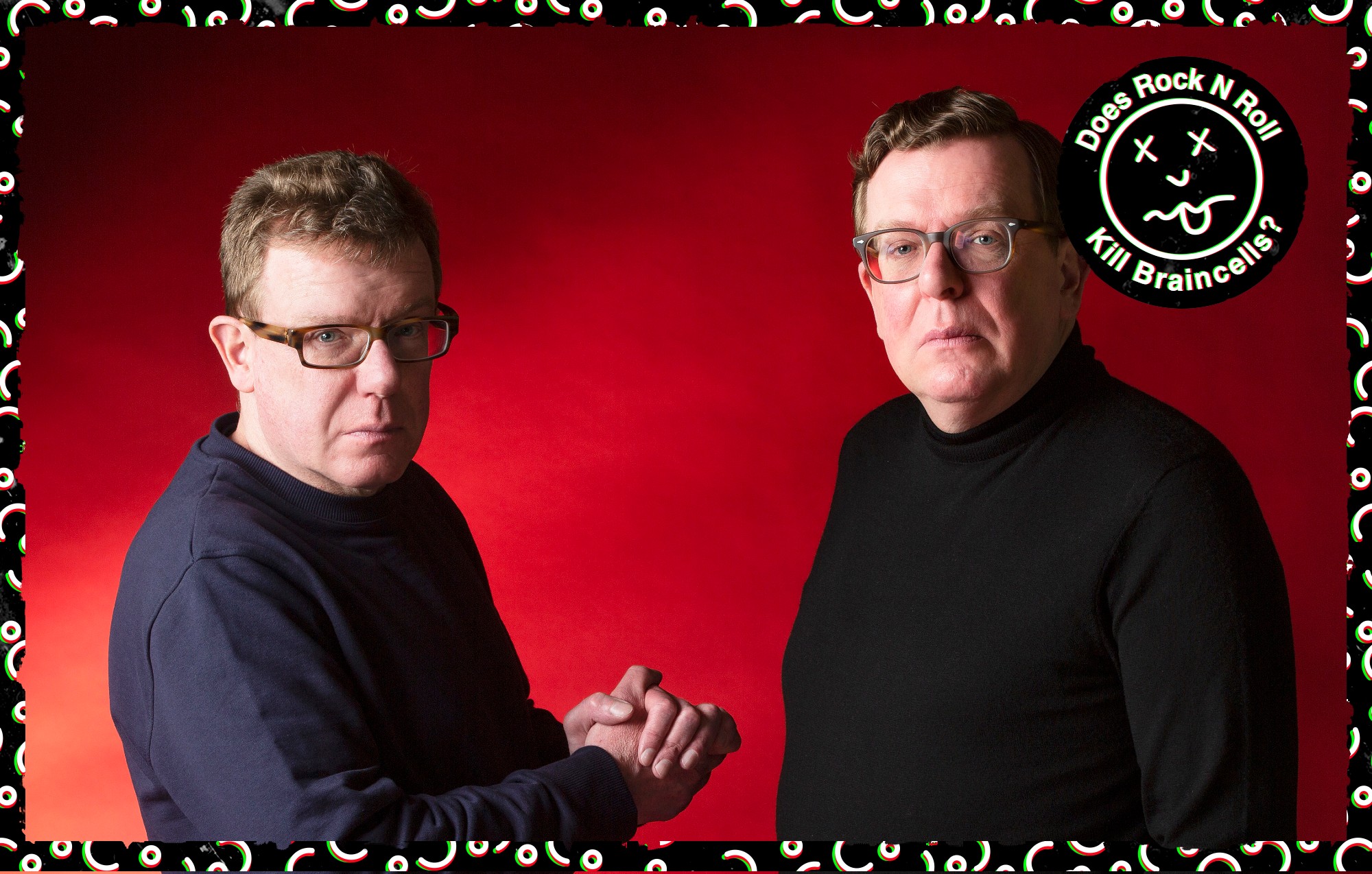 Which Las Vegas band covered The Proclaimers’ ‘I’m Gonna Be (500 Miles)’ at a Falkirk Stadium gig in July?

Craig: “Was it The Killers?”

Charlie: “It’s become a tradition now of American and English acts coming to Scotland and covering that song. It’s done quite regularly.”

Craig: “You see something on a PRS [royalties] statement and think: ‘We’ve never fucking played it there!’, and then realise: ‘Ah, no, somebody else did.’ We’re happy for anybody to sing it.”

It’s ironic that around the time of The Proclaimers’ breakthrough in 1987 when big Scottish bands like Simple Minds tended to sing in American accents, you stood out for singing in your natural voices; and now US acts like Imagine Dragons adopt dodgy Scottish accents to belt out ‘I’m Gonna Be (500 Miles)’…

Charlie: “It’s revenge! It just proves we’ve ruined the culture! Back then, sometimes people indicated they thought us singing in our own accents would be a problem. I think it does limit you to a degree, but it also made us more distinct, so it balances out. All people had heard sung in a Scottish accent before was folk and comedy songs, not contemporary songs about the times we’re living in, so they’d think: what the fuck is this? And to a certain extent, I think some people still do.”

What was the name of the second punk band you formed in the 1970s?

CORRECT. Was it anything like the famous US hardcore punk band?

Charlie: “We never ran into Henry Rollins or any of Black Flag, so I don’t think they know about it, but he’s quite a formidable character and we’re certainly not going to pretend that our Black Flag should have been more successful than his one!”

The 2013 Proclaimers jukebox film Sunshine on Leith is the first in a trilogy of musicals directed by Dexter Fletcher. Name the other two.

Craig: “Bohemian Rhapsody, which was the Queen biopic…”

Charlie: “And Rocketman which was the Elton John film.”

Charlie: “There was trepidation in taking the very successful Sunshine on Leith theatre show which had been done beautifully and saying: will that translate to film? But Dexter really understood the energy and joy of it and did a fantastic job. And it seems to have set him for films with less well-known musical acts down the line!”

Which two comedians impersonated you on Saturday Night Live in 1993?

Craig: “Mike Myers and oh! What’s the other guy’s name? I can see his face!”

WRONG. It was indeed Mike Myers. The one you missed was the late comedian Norm Macdonald.

Charlie: “It was great, and we met Mike Myers around the same time when we bumped into him at a TV studio. He and Norm Macdonald definitely got our jolty movements right – there have been quite a few impersonations done of us, but theirs was the most accurate. James Corden and Niall Horan also impersonated us in a late-night talk show sketch, and we’re honoured by everyone who does it. Keep them coming!”

Any tips for imitating you?

Charlie: “All you need to do is make sure I’m standing stage-left. The guy with the guitar stays left, Craig stays right, and you’ve got it!”

You also appeared as yourselves in an episode of Family Guy…

Craig: “We were on tour in the US and they asked us to come in and record it. Family Guy was only just starting to break in the UK, and we did it on our day off. Because we look odd, we’ve definitely got over to a broader audience than many bands who sold far more records than us.”

Which actor chose The Proclaimers’ ‘Over and Done With’ as one of his Desert Island Discs?

CORRECT. Among other related moments, he’s also covered ‘Sunshine On Leith’ for charity and appeared in an all-star Doctor Who Proclaimers’ spoof.

Charlie: “David’s a good lad. We’ve known him a number of years now and he’s every bit as nice offstage as he is on, and he’s also a massive Proclaimers fan. You get people who know a few songs, but he knows all the B-sides as well! He walked down the aisle to our song ‘Life with You’ at his wedding and quite a few big occasions in his life have been soundtracked by our music.”

Who’s been the most unexpected person who’s turned out to be a Proclaimers fan?

Charlie: “Michael Gove came to see us live and put us down as a ‘guilty pleasure’, but knowing he’s a fan feels like a very dirty secret. It was every bit as weird as David Cameron choosing The Smiths as one of his Desert Island Discs!”

How many canines appear on the cover of The Proclaimers’ 2015 album ‘Let’s Hear it for the Dogs’?

Charlie: “They weren’t our dogs. They belonged to a gentleman who lives in the north of Scotland, and they behaved impeccably during the photoshoot in Edinburgh. That was the first album we did with producer David Eringa, and the fact we’ve done two further albums with him – including our latest ‘Dentures Out’ – shows that we felt it worked.”

Which Proclaimers song did Barenaked Ladies cover for their 1989 demo tape ‘Buck Naked’?

Charlie: “‘Over and Done With’ would be my guess.”

Charlie: “We had the pleasure of touring with them for a few weeks before 9/11 and they’re fantastic guys with a great Canadian sense of humour.”

In their autobiography, they namecheck you as an influence…

Charlie: “They probably thought: ‘If they can get away with looking and sounding that awkward, we can do it as well!’ We definitely feel a kinship with them.”

‘Letter from America’ peaked at Number Three in the UK charts in 1987. Name either of the two acts who pipped you to the top spot.

Craig: “T’Pau with ‘China in Your Hand’? Who was the other one?”

CORRECT. T’Pau topped the charts; George Harrison was at Number Two with ‘Got My Mind Set on You’.

Charlie: “I don’t mind being beaten by a Beatle – T’Pau is another matter! [Laughs]”

What were the most surreal moments during that period?

Charlie: “Just going on big TV shows like Top of the Pops and meeting Paul McCartney or sitting in the make-up chair next to ‘60s sex symbol Raquel Welch.”

Craig: “Paula Yates introduced our debut performance on TV [on Channel 4 series The Tube] as: ‘Now it’s time for something totally weird and unusual’, and we felt like we were different from the other acts that were around at the same time. We filmed that in January 1987, and we’d been on the dole for ages until the December before, and the only other people who looked like us in music was The Housemartins and Billy Bragg. Everybody else was dressed like a Christmas tree.”

Complete the following lyrics: ‘Eighties pop stars who thought they would last….’?

Craig: “Now at Butlin’s can be seen’”

CORRECT. On the track ‘The Recent Past’ from your latest album ‘Dentures Out’.

Craig: “That song is double-edged. It’s taking the piss out of ‘80s pop stars who are playing Butlin’s while also acknowledging down the road that might be us!”

Charlie: “We haven’t been offered Butlin’s yet, but we’ll have to see what the future holds. Pantomime would be good as well!”

Craig: “‘Dentures Out’ is the most political record we’ve made, and has a theme of the past running through it. It’s anti-nostalgia, and looking around the United Kingdom and seeing that some of what’s happened is un-satirize-able.”

Charlie: “There’s a general malaise and decline in the west. In Britain, nostalgia has become almost like a fetish now. It’s sad a country that was once dynamic now looks decrepit and on skid row.”

Talking of politics: you’re both prominent Scottish nationalists. Boris Johnson was always seen as an asset to those campaigning for Scottish independence, owning to his lack of popularity there. Will new Prime Minister Liz Truss help or hinder your cause?

Charlie: “I think Liz Truss is an apparatchik. She’ll be more competent than Boris Johnson but then the Downing Street cat would have been more competent than Boris Johnson! She’s an ideologue and that’s going to cause her trouble. Until the SNP [Scottish National Party] stop playing by Westminster rules, we’re not going to get independence. They need to go back to being an insurgent movement. The SNP have fired all their bullets and they’re going to have find another gun.”

The Manic Street Preachers’ James Dean Bradfield plays guitar on both ‘Dentures Out’’s anti-nostalgia title track and ‘Things As They Are’, which takes aim at right-wing media proprietors…

Charlie: “Those are the two most political songs on the album. David Eringa has worked with the Manics since the 1980s and asked if he could get James in to play on a couple of songs, which we thought was fantastic! Surprisingly, James seemed nervous, but his playing got better and better the more takes he did and he put his stamp on both those songs.”

In 2007, you re-recorded ‘(I’m Gonnna Be) 500 Miles’ with Peter Kay and Matt Lucas (as their characters Brian Potter from Phoenix Nights and Andy Pipkin from Little Britain) for Comic Relief, and filmed a cameo-stuffed video. Name any of the three celebrities who are listed as being in it during the end credits but do not actually appear in the video?

Charlie: “We weren’t at the filming of the video with the celebrities. We did our bit in front of a hall of lookalikes who were then replaced by genuine celebrities on the second day. Maybe the shame was too great! Perhaps Lord Lucan was one of them? Shergar? [Laughs]”

Charlie: [Laughs] It was a bit disappointment when he didn’t show. Shergar was understandable! The concept was Peter Kay’s and he got Matt Lucas and David Walliams involved. We went along for the ride and tried not to corpse when we were doing it. You can be for or against these kind of singles, but it did raise a hell of a lot of money for charity. Matt Lucas later directed our ‘Spinning Around in the Air’ video with us in drag as two old ladies.”

Bonus question! For a half-point: If you add up all the times you say ‘500 miles’ in ‘I’m Gonna Be (500 Miles)’, how many miles would The Proclaimers’ Fitbit say you’ve walked?

Charlie: “Keep the song brief, cut down the number of miles, and it was a huge hit! The secret to its success is it’s got a driving beat and gets sung in karaoke bars in Vietnam and China – even if you’re not a native English speaker, you can sing it quite easily.”

Charlie: “That’s an alright score. Better than any marks we ever got at school, I can assure you of that!”

The Proclaimers’ latest album, ‘Dentures Out’, is available now. They tour the UK from October