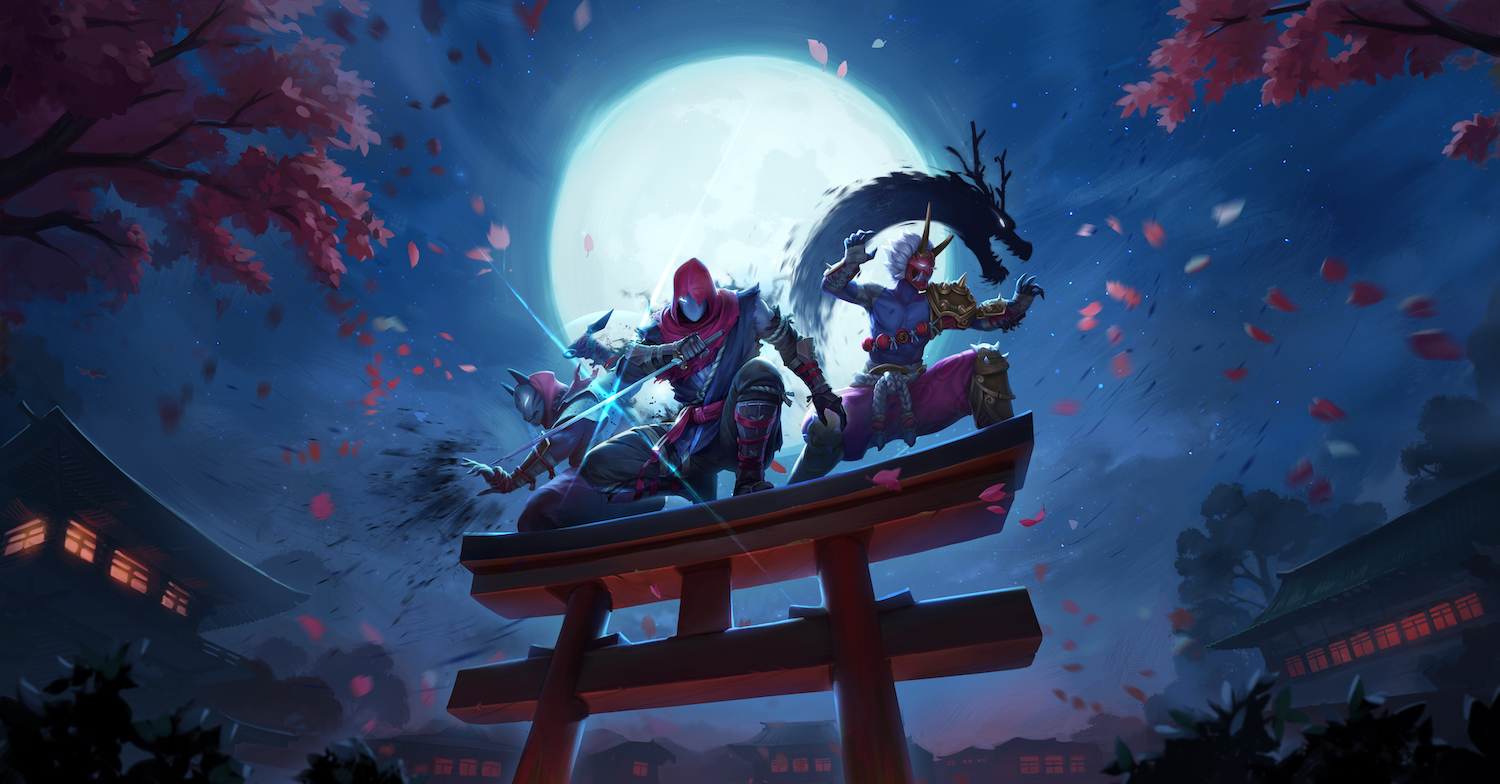 Fittingly for a stealth game, the original Aragami was something of a sleeper hit when it arrived in 2016. Barcelona-based developer Lince Works stepped out of the shadows with a beautiful, cel-shaded shinobi saga that weaved a fable of umbral warriors and kidnapped maidens in a mystical not-quite-Japan world, which coupled with pure stealth gameplay to win the studio a legion of fans.

Aragami 2 is set a century later, and while there are some connections to the first game, this sequel requires no prior knowledge of it. In some respects, coming in blind might be preferable, as the two games are almost as different as night and day – for better and worse.

Returning players will find Aragami 2 an almost shocking departure from its predecessor, to the extent that its red-and-black garbed protagonist is about the only solid link. Just about everything else about the game has changed, from its stealth mechanics and power sets to the very structure of the game itself.

Players take on the role of an Aragami – a being seemingly made of shadows – after awakening from a bloody skirmish. Drawn to Kakurega Village, a small town entirely populated by fellow shadow people, you’ll learn that not only is the population slowly losing their memories but the entire Rashomon Valley is under threat from a faction knows as the Akatsuchi.

While the original told a fairly guided, linear story, Aragami 2 instead opts for a mission-based approach with the village elder, Katashi, sending you off to investigate Akatsuchi’s movements or rescue villagers. Completing missions earns experience points, as the Aragami now levels up RPG-style rather than finding hidden scrolls to learn abilities, and can be replayed to chase a higher success rank or earn extra experience to level grind.

Kakurega itself acts as a hub world between each outing, allowing you to interact with villagers, spend ability points to unlock new passive skills and active Shadow Powers, or craft armour and consumable support items. It’s a stark departure from the first game, but it all works for the better, not only giving you a space to forge a connection with, but a place to better customise your character and prepare for the next mission.

Those skills and powers also get a brilliant expansion in Aragami 2. While one of the first game’s signature abilities – creating a path of shadows to teleport to – seems to have slipped into the darkness itself, its absence is more than made up for with an entire tree of new ninja tricks.

While some of the passive skills provide useful techniques such as seeing an enemy’s patrol path, helping you figure out when to move without being spotted, the active powers are a sadistic delight – and as they’re all upgradable by spending further ability points on them, usually get even more so. One of the first powers is simply the ability to whistle, luring guards away to investigate the disturbance. Initially, any guard in earshot will respond, but once upgraded you’ll be able to target a single enemy, enabling you to take them out one by one.

Other powers aid stealth, such as blowing up light-emitting crystals to provide cover (or, upgraded, knock out enemies), or allow you to mesmerise foes, allowing slightly more daring movements around areas as you can run up to attack without them raising an alarm. You’ll even be able to briefly turn invisible with the right skill unlocked.

The versatility of the entire skill system also feeds back into the replayable mission structure. Some may be nightmarishly tough the first time you have to play them through, but returning with new skills later can be fiendishly fun. There are often hidden collectibles or stashes of gold to be found that are only realistically reached with higher spec skills.

However you’re kitted out though, there’s one major change to Aragami 2‘s stealth mechanics – while you’ll remain hidden under the cover of shadow, you can no longer “Shadow Leap” to any spot of darkness, only to certain rooftops or ledges. That forces a fundamental shift in how you skulk around levels. It all feels more like stealth gameplay in the model of Metal Gear Solid, surreptitiously making your way around unseen, luring enemies off their patrols to silently dispatch them, and using an array of tools to better avoid detection.

By far the biggest departure from the first Aragami, though, is combat. Which is to say, there is some. In the original game, stealth was absolute – a single blow from an enemy, all wielding torches or light-based weapons, would dissipate the Aragami back into nothingness. Here, if you’re detected by one of the Akatsuchi forces, you can either try to escape or engage in some Sekiro-style swordplay.

Stealth is still paramount – you’ll never feel like an undefeatable blade master, and more than a couple of enemies will easily take you out – but there’s a surprisingly solid system of parries, blocks, and attacks to learn. It’s great just to have a chance to fight back, rather than the endless frustration of one-hit kills in the original. The trade-off though is that there’s no longer a checkpoint system in place – if you’re killed twice during a mission, it’s a critical failure, forcing you to restart the whole mission from scratch.

However, enemy AI is lacklustre. While Akatsuchi will react to loud sounds or to directly seeing you move around, or raise the alarm if they see a body – pro-tip, hide your bodies, people – they’re all rather rigidly locked to their routines. For instance, there’s no awareness they’re increasingly alone as you dispatch their compatriots – some sense of mounting paranoia as you whittle their forces down would have been a nice touch.

For all its unquestionable improvements in gameplay mechanics, impressive powers, and overall structure though, there’s something that feels… missing about Aragami 2. It’s chiefly in the visuals, with the rich and imaginative look that the original’s cel-shaded-meets-inkwash aesthetic afforded replaced with a more conventional, seen-it-all-before polygonal approach.

In itself, that’s no crime – innumerable games create beautiful and detailed worlds with those techniques, after all. Rather, the problem is that the pursuit of higher fidelity doesn’t seem to be matched by the quality of the end results. Up close, textures of clothes and armour, or any patterns on them, can appear pixellated, and although Lince Works says the low res effect is planned to be addressed in a Day One patch, we can’t see how that will improve choices made in the overall art direction. Even discounting the texturing, character models almost give the impression of blurriness, lacking the clear delineation of the original’s heavily-inked outlines.

Then there’s the repetition. Both enemy types and the shadow folk in Kakurega Village lack variety, with the same character models cropping up again and again. Admittedly, there’s a practical application to this in missions, where recognising enemy types on sight helps you predict their behaviour and better plan your movement through a level, but some greater distinction would help it feel as though you’re doing more than dispatching identikit bots.

It’s not just the mere presentation of the visuals that disappoints though; it’s the game’s sense of design and UI. The original Aragami adopted a beautifully minimalist approach, with no on-screen HUD cluttering the view. There was an elegance to how Lince Works incorporated player-centric information there, with the amount of shadow energy remaining and the number of special abilities to be used appearing as the details on the Aragami’s cape – a simple visual signifier that was ever-present, without intruding on the world.

In Aragami 2, we get energy bars and vitality gauges cluttering the screen. It feels like a step backwards from the immersive simplicity of the first game, a reminder that you are in fact playing a game, breaking the sense of space and presence that the original masterfully presented. It’s a small change in the grand scheme of things, but one that makes the world feel somehow less special.

Ultimately, Aragami 2 is more a reimagining than a sequel as might be typically understood. It’s effectively a whole new game with a few nods in lore and concepts to an entirely different game that came out five years ago. For the most part, it works – but in tone and presence, it feels a shadow of its former self.

We reviewed Aragami 2 on Xbox Series X. It’s also available on Xbox One, PS5, PS4, and PC on September 17.

Mechanically, Aragami 2 is an improvement on its predecessor in just about every way. It’s a bigger, more ambitious game, and Lince Works have expanded on – or wholesale replaced and improved – core mechanics in satisfying ways. It is undeniably a better stealth game. However, in becoming that, it’s lost the spark that made the original special.