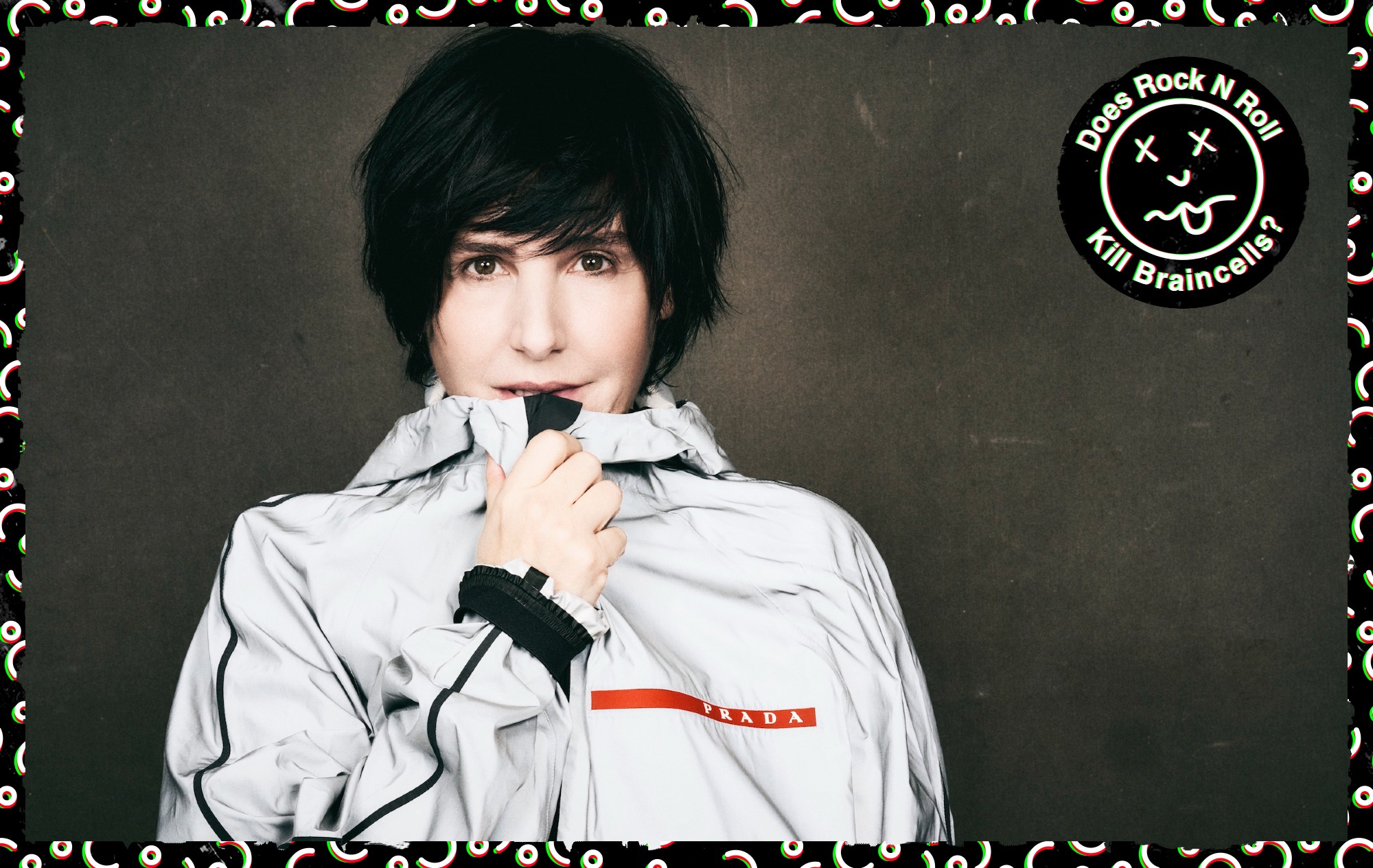 Who is the only member of the Wu-Tang Clan not to feature on the recording of your 1998 collaboration ‘Say What You Want (All Day Every Day)’?

“ODB was originally supposed to do it. He was the first Wu-Tang member I spoke to.  I put the phone down on him. He called me up and was like, ‘Yo, yo yo, what’s up peaches?’ and I told him to fuck off because I thought it was a wind-up! He got arrested just as we arrived in New York, so Method Man stepped up and wrote his rap about bottles of rum because he thought the British were pirates. We didn’t start until after midnight and it was all of us [Texas], all of the Wu-Tang – apart from ODB – and [Wu-Tang affiliates] Sunz of Man. We were sitting round a piano singing – it was like a party in Glasgow! Method Man asked me: ‘Do you know any raps?’, and I did the whole of Blondie’s ‘Rapture’. They were howling with laughter!”

Were you tempted to rap on the single?

“No! Put it this way: when we performed it at the Brit awards, Method Man suddenly got the fear backstage and said: ‘I think I might sing’. I grabbed him by the scruff of the neck and said: ‘Oi! Look into my eyes – You and I are Marvin and Tammi for the ‘90s! Fuckin’ rap and I’ll sing!’. The idea of him singing is probably how he felt about me rapping!”

Debbie Harry once gave you the dress she wore in the video to Blondie’s ‘Heart of Glass’. But what star-rating did you award their album ‘The Curse of Blondie’ when you reviewed it for The Observer in 2003?

“(Incredulous) Did I? I don’t even remember reviewing ‘The Curse of Blondie’! Is this one of those loaded questions where I said something really bad? Did I give it nothing? One star?”

WRONG. You rated it five stars out of five!

“I have no memory of that! (Laughs) Debbie came round my house and I cooked dinner for her and John Taylor from Duran Duran. We were playing loads of records and, because she has so many iconic moments fashion-wise as well as musically, I asked her about her outfits and she said she’d kept everything. I went: ‘Have you got the ‘Heart of Glass’ dress?’ And she replied: ‘Yeah. Do you want a loan of it?’ And she sent it to me! I never ventured out in it because why would you? Compare Sharleen Spiteri in the dress to Debbie Harry – you know who looked better! Trust me, it took a couple of glasses of wine to get the guts to put it on! But that was a ‘mind-blown’ moment.”

In the equation that appears on the chalkboard in the Peter Kay-featuring video to 2005’s ‘Sleep’, what does E equal?

“What does E equal? Getting off your tits! (Laughs)”

“That’s so Peter! We’re good mates. He came round to my house once and arrived with a polybag and went, ‘Are we stopping in?’, before delving into his bag and dropping his trousers to change into a pair of trackie bottoms and slippers. Who the fuck comes to your house with their mufti gear?! He then proceeded to act out the complete storyline for an idea for a jukebox musical he had, only stopping to play the songs in between. It was one of the most entertaining nights I’ve ever had.”

Texas opened for Madonna in 2000 at Brixton Academy. Name her two other support acts.

“Richard Ashcroft and… I don’t know who the other one was.”

WRONG. You missed The Prodigy’s Liam Howlett, who DJ-ed.

“I met Madonna when she first moved to London and I went round her house for dinner. It was when she’d first met Guy [Ritchie]. We were introduced through Stella McCartney. When she was doing Brixton Academy, she phoned me up and said she wanted me to support her. I went: ‘Hell yeah!’. It was such a buzz seeing her in such a small venue and everyone and their auntie was there. I like her as a person – she’s fucking funny and super-smart – but I haven’t seen her for a long, long time. It was a moment.”

“Oh my God, I haven’t listened to the Rammstein track for years. I cannot for the life of me remember the lyrics.”

“Which means ‘It’s cold and motionless / I cry quietly into time’. My little bit of German! Das ist gud, ja? We had the best laugh and a mental night recording with Rammstein in Stockholm. We went out to dinner afterwards with Till – in his big black leather coat – and everybody was really drunk ‘cause we were doing shots and one of my band members challenged Till to a swimming match in a lake, forgetting that Till used to be an Olympic swimmer. We got back to the hotel at 5am and had to leave at 6.30am to fly to England to perform on a radio roadshow. I kept fainting and had to be put in a wheelchair at the airport, with everybody kidding that I was like David Walliams and Matt Lucas’ Little Britain characters Lou and Andy. I got back and played the gig in between being sick at the side of the stage and the doctors there diagnosed me as suffering from exhaustion.”

On which two Texas/solo songs does Serge Gainsbourg receive a writing credit?

“(Starts humming) Fucking hell! I’m trying to remember the title of my own song here. ‘Guitar Song’ and… oh, fuck! My mind is a mess!”

WRONG. It’s Texas’ 2001 single ‘Guitar Song’ – which samples by Serge Gainsbourg and Jane Birkin’s ‘Je t’aime… moi non plus’ and your 2008 solo song ‘Melody’, which samples their track ‘Jane B’.

“I once sang with Jane Birkin and she sucked my face off during the gig! We were performing a Tom Waits song and I’m having a moment thinking, ‘This is cool. I’m onstage with Jane Birkin’, and she suddenly starts kissing me and I’m thinking: ‘Am I dreaming this?!’ We had a singsong and a snog. It was fab! Serge presented us with our first ever gold discs in France on a television show. We made him exclaim ‘Fucking hell!’ and jump back when our guitarist accidentally set his own giant hairsprayed quiff on fire.”

You performed your cover of Olivia Newton-John and Electric Light Orchestra’s ‘Xanadu’ on The Graham Norton Show in 2009. Name two other guests who appeared on the episode with you.

“Joan Rivers and the two Irish boys who are fucking mental cases. What’s their names? Zig and Zag? Beavis and Butt-Head? (Laughs)”

WRONG. You mean Jedward. Apart from Joan Rivers, you could have had Sarah Jessica Parker and Dominic West.

“Jedward were like two fucking dogs on heat that night. It was like having two Tasmanian devils in the green room. But Joan Rivers was the coolest person – talk about funny! Unlike other big Hollywood actors who are all face to the cameras then right cunts when they’re turned off, she was so lovely to everyone on the set. The cameras broke down when we were recording and there was a big gap while they fixed them, and she started telling all these hysterical stories. People were crying with laughter like I’d never seen. She was a genius.”

What two numbers did Texas’ single ‘ I Don’t Want a Lover’ reach on the UK Top 40?

WRONG. But so close! The original 1989 version reached Number 8 and the 2001 remix reached Number 16. The first, aborted attempt at ‘I Don’t Want a Lover’ was recorded by Chic’s Bernard Edwards before he reportedly got coked-up and did a moonlight flit to Mexico…

“We went to LA and Bernard Edwards was producing our [1989] ‘Southside’ album and [Chic’s drummer] Tony Thompson plays drums on the original ‘I Don’t Want a Lover’, and burst three bass skins because he hit his kit so hard. When it was time to do my vocals, Bernard got wasted and ran off into the desert because there was a movie being made about the Chic story and he wasn’t happy with who was playing him. I went from feeling like I’d died and gone to heaven to everything going tits up. But it was a good learning curve that taught me the lesson ‘I don’t give a fuck who you are. This is our record; not yours’, and to challenge anything I’m not happy with. I remember when we worked with [producer] Dallas Austin in Miami and Madonna warned me beforehand: ‘He’s always late. Don’t give him an inch’. On our first day, he was six hours late, so I tore him a new arsehole and we became great friends.”

“I can’t remember! Is one of them the Giorgio Moroder mix?”

WRONG. Yes, but the other is a live cover of The Human League’s ‘Don’t You Want Me’.

“I’d never have got that! We hung out in LA with Giorgio Moroder and we were sat there with the expressions of kids in a sweet shop as he told us all his stories about Donna Summer.”

Which pop icon once refused to believe you weren’t from the US state of Texas?

“(Laughs) Honest to God! I love Lionel Richie and it was at a party when we were signed to Universal. I was introduced to him as: ‘This is Sharleen from Texas’, and I clarified that: ‘I’m not actually from Texas; I’m in a band called Texas’. For the rest of the night, Lionel would go off and talk to somebody then return and go: ‘Were your parents from Texas? Does your father work in Texas?’ Every angle! He wouldn’t believe I wasn’t from Texas. To the point where I went: ‘Lionel, listen, fucking give it up! Drop it! We are just called Texas. There’s no connection whatsoever. None! Our band name’s taken from the movie Paris, Texas. There is No. Connection. To. The. State. Of. Texas! In any way!’ You practically saw his head explode, but he still wouldn’t let it go (Laughs).”

Who’s been the most unexpected fan of Texas? (The band, not the state)

Alan Rickman, who I tango-ed with in the Texas video ‘In Demand’ and sang with [on the Texas track ‘Start A Family’]. We were having a meeting about the video and who I should tango with and our friend composer Michael Kamen popped his head round and said: ‘I was on the phone with my mate Alan Rickman. He’s a big fan, and it fell into place. We remained great friends and I miss Alan greatly, and I still hear his voice.”

“Do I win anything? No? For fuck’s sake, I’m from Glasgow, I don’t do quizzes unless I win shit!”