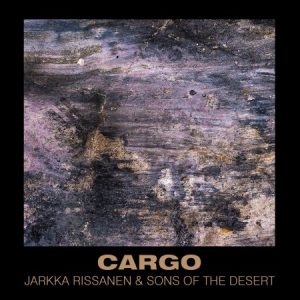 Blues artists understand the need for an energy change, within an album or a set. It’s why so many of them keep assorted jazz licks in their arsenal, so they can take things down a notch, keeping the music bluesy, but the dynamics lower-key. Finnish artists Jarkka Rissanen & Sons of the Desert tap into a blues jazz vibe on Cargo, an album of chill, instrumental blues.

Guitarist Rissanen, who also handles everything from mandolin to lap steel, is well-known in the Finnish roots music scene. Cargo spotlights his tasteful playing, which follows in the jazzier traditions of blues players like Clarence “Gatemouth” Brown and Stevie Ray Vaughan. Vaughan often used extended instrumental jazz tracks, like “Lenny” and “Riviera Paradise,” to close out albums and live sets and Rissanen applies a similar kind of relaxing jazzy blues to all of Cargo.

Laid back music like this can be a trap for the artist. The musician is trying to work with a specific sound and intensity, but it’s easy to drift from mid-tempo into dull, like a drowsy driver floating over to the shoulder. It’s especially difficult on an instrumental album without any heavy rockers to amp up the energy. Rissanen navigates the limitations using a few tools.

For instance, “Pow-Wow” is the album’s bluesiest track, using acoustic guitar and slide that give the track a country and western kind of feel. Coming in more than halfway through the album, it feels like a reset, especially juxtaposed against the more electric-oriented tracks. “Roll Call” has a catchy groove, and it’s hard not to wonder what the track, with its memorable riff, might sound like with lyrics. However Rissanen uses some jazzy soloing and pops outside of the song’s pocket, getting almost atonal at times. Rissanen is a bluesman at heart, though, and right as melodies veer too far from the song, he brings them back. “Roll Call” isn’t a Miles Davis; it’s Rissanen and Sons of the Desert successfully stretching out and getting experimental within the confines of blues rock.

However, even with all of the tasteful playing and smart arrangements, an album of instrumentals can be a challenging sell. For many people, especially myself, this kind of music, especially when it doesn’t have too much of an edge, becomes background music. Rissanen and his band have created pretty tunes, but for many, it won’t be the type of album you seek out for listening, so much as it will be something to accompany you while you do something else.